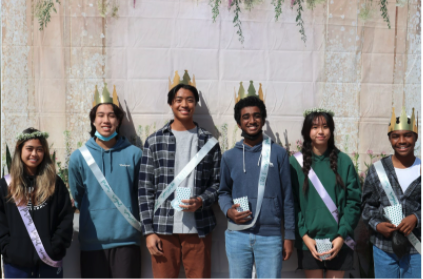 With the upcoming months, prom is found to be right around the corner. This is found to be an exciting time for many junior and senior students due to it being one of the main traditions of high school. Much excitement has seemingly formed from this announcement considering many juniors and seniors of previous years were deprived of having a prom due to the uprising of Covid.

On March 10, 2022, the announcement of where, when, and what theme prom was presented in the quad during lunch, plus the addition of the announcement of the prom royals as well. With much anticipation, our junior class officers, Viren Meta and Angellina Train, announced this year’s prom theme is  A Midsummer Night’s Dream which will be held at the Carson Civic Center on April 30, 2022, from 7:00pm to 11:00pm.

Many are ecstatic about the upcoming prom considering the fact that the seniors of this year were not able to experience and attend a prom their junior year due to Covid. The same situation occurred as of two years ago since the beginning of this virus hit in mid-March and increased significantly since then, resulting in the transition from in-person to online.

One student in particular who has indicated their excitement for prom would be Senior, Alexander David.

When asked if he was excited about prom he stated, “Yeah, I’m excited for prom..the idea of going to a dance again is nice since our Winter Formal was canceled.”

The excitement of the prom premiere continued with a great performance from our Cerritos Dance Team. As they took center stage in our quad, students gathered to watch in amazement.

Towards the end of the premiere, junior class officers Viren Meta and Angellina Train were handed an envelope containing the names of our Prom Royal Nominees. As they called out the names of each nominee, seniors Angelo Andal, Evelyn Kim, Jared Yarbrough, Landen Loo, Leilani Morante, and Nikil made their way to the center quad to receive their sashes and crowns.

Jared Yarbrough, a nominee, is extremely honored to have been nominated and can’t  wait to find out who the two royals are at prom, he said.

A Midsummer Night’s Dream Prom awaits our juniors and seniors. In the weeks that follow, it is time to find dates, pick out the best suits and dresses, and dust off our cameras.

If you would like to attend Prom, pick up a Prom Contract today from the ASB window during snack or lunch. The last day to submit contracts for approval is April 12th by the end of lunch period. Tickets are on sale from today to April 14, 2022. Students who have ASB (CHS students only) ticket prices are $105, students without ASB (this would also include outside guest) ticket prices are $120.